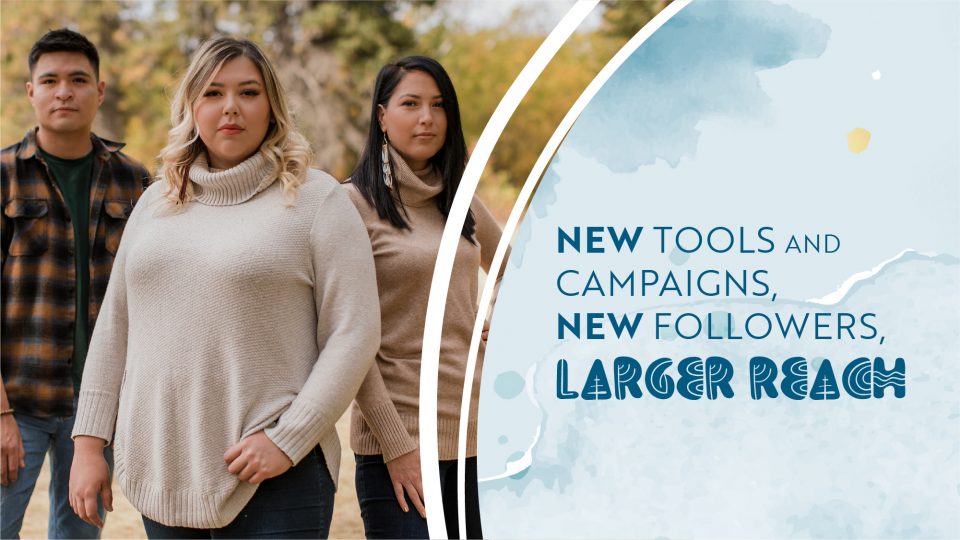 For example, this fall we created a new donation page for the Wabanaki Resiliency Lodge and ran a social media campaign to help raise funds. Our target is to raise $60,000 of the $160,000 needed to complete phase one of the lodge renovations.

We launched a new From the desk of the CEO page. This new page will house all of the CEO reports and messaging, including stories from the Kci-Niwesq magazine and Shining the Spotlight newsletter.

The team spearheaded a major campaign for National Indigenous Veterans Day, which is held every year on November 8. As part of this campaign, we released a press release urging Canadians to honour the valour, sacrifice, and bravery of Indigenous Peoples who have served in defence of Canada.

The team also highlighted the naming of our CEO, Lynne Groulx, as one of the four top CEOs in Canada in late October. We announced her win at Canada’s Top 100 Most Powerful Women in Canada, by the Women’s Executive Network Diversity Council of Canada.

As always, the team addresses emerging issues in the news along with being proactive externally by developing and issuing news releases and statements. These tools help place the spotlight on key issues that impact grassroots Indigenous women, girls, Two-Spirit, transgender, and gender-diverse people that NWAC represents.

For example, in mid-October we issued a statement and press release demanding NWAC be given a say in the composition of a new council on reconciliation (French version) when NWAC appeared before the House of Common’s Standing Committee on Indigenous Northern Affairs. We were successful in our ask!

In early November, we released a statement on increased incarceration rates of Indigenous women—particularly for maximum-security prisoners, which account for nearly 65 percent—as outlined in the annual report of the Correctional Investigator of Canada. (French version)

Over the month of November, our overall reach totalled nearly 2 million users (1,853,419), with Facebook and Instagram showing the most engagement during this 30-day period.

On Instagram, our most popular Indigenous Veterans Day post garnered 905 shares, reaching 2,491 people, 18 percent of which were not following NWAC. This resulted in an increase of 66 new followers. On Facebook, posts from this campaign reached 4,935 accounts, 5,020 impressions, and 248 engagements.

The announcement of Ms. Groulx as one of Canada’s top CEOs reached 1,243 people on Instagram, 6 percent of whom did not follow NWAC, and gained us a new follower.

After developing a new microsite for our new National Apprenticeships Program, we promoted the program using Twitter and LinkedIn. The posts gained traction on both platforms, with 1,531 impressions on Twitter. LinkedIn saw 1,083 impressions, 82 engagements and 42 clicks.