R v Brown: What This Means for Overincarceration and Violence Against Indigenous Women 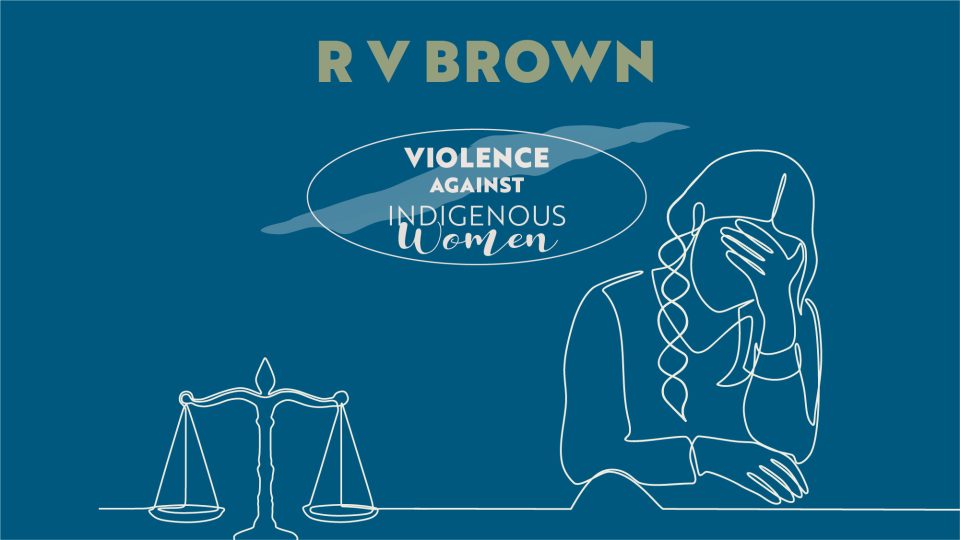 The Supreme Court of Canada recently delivered on a landmark decision. In striking down section 33.1 of the Criminal Code as unconstitutional, the Supreme Court unanimously ruled that voluntarily taking intoxicating substances cannot replace the criminal intent required for a conviction.

In R v Brown, the accused consumed the hallucinogen psilocybin (in the form of magic mushrooms) and alcohol, ran naked into a neighbour’s home, and assaulted her. Mr. Brown was acquitted when his trial judge found he was not able to control his body’s actions and could not have intended to commit the offence beyond a reasonable doubt. The judge struck down section 33.1 as unconstitutional. However, Mr. Brown was convicted on appeal.

Section 33.1 states that a person who enters a self-induced intoxication state cannot use the common law’s non-mental disorder automation defence to avoid criminal responsibility for assault they commit while intoxicated to an extreme degree (far beyond drunkenness). The Supreme Court struck down this law in Brown because it violated the principles of fundamental justice and the presumption of innocence guaranteed by sections 7 and 11(d) of the Charter—violations that are not justified pursuant to a Charter section 1 analysis. “The legitimate goals of protecting the victims of these crimes and holding the extremely self-intoxicated accountable, compelling as they are, do not justify these infringements of the Charter that so fundamentally upset the tenets of the criminal law,” reads the decision.

The “self-induced intoxication” defence is meant to be used in extreme and rare cases when it can be proven “that a person is not even capable of forming the mental element required to commit the crime,” and has lost choice or control over their actions. So, to be convicted for a general intent criminal offence, the Crown must prove the accused both committed the offence and intended or reasonably foresaw their action’s consequences. The Supreme Court ruled unanimously that without voluntariness, an accused cannot be found guilty of a general intent crime. However, the decision leaves a gap in the law: a person charged with assault can now argue extreme intoxication to avoid criminal responsibility.

Parliament tabled Bill C-28 a week after the decision came out, and NWAC intends to consult with the Justice Department to advocate for a law that responds to Indigenous Peoples’ experiences facing systemic discrimination in the criminal justice system.

In its 104-page ruling, the Supreme Court urged Parliament to enact legislation that holds extremely intoxicated people accountable for violent crimes, to protect vulnerable victims, particularly women and children. This is significant because what we see too often is that the criminal justice system fails survivors of all forms of violence, especially survivors of sexual violence.

Indigenous women and girls are at a disproportionate risk and face among the highest rates of violent and non-violent victimization of all population groups in Canada.

The rate of sexual assault self-reported by Indigenous women was more than triple that of non-Indigenous women, and rates of victimization by a stranger were still over twice as high in Indigenous communities. It is more important for the criminal justice system and the actors within it to fully understand this defence and pursue justice for women and girls.

These three offences accounted for a relatively small share of police-reported crime in non-Indigenous communities (23%), but more than half (58%) of crime reported in Indigenous communities. Other factors that might influence the high rates of mischief and disturbing the peace include the small size of communities where incidents such as these may more readily come to the attention of the police. It is also important to note that these specific offences are related to mental health and substance use conditions, which are proportionally more frequent among Indigenous populations due to colonial harms, including Indian residential schools, the Sixties Scoop, Indian Act inequities for women, discriminatory child welfare funding, and elevated poverty rates.

NWAC’S second interest is to advocate for laws and policies that favour victim-centred and healing frameworks responding to Indigenous women, girls, and gender-diverse people’s unique vulnerability to violence. NWAC is primarily concerned with future cases involving those who are accused and/or victims, because they bring unique and systemic social histories that engage Gladue and reconciliation principles.

NWAC’s consultations with the Justice Department present an opportunity to reform the criminal justice system’s treatment of Indigenous accused and victims. Gladue and reconciliation principles guide these efforts.

One of the reasons Indigenous Peoples are overincarcerated is the disconnect between Western criminal law principles and the guiding norms and principles animating Indigenous legal orders.

Where an Indigenous accused’s conduct is informed by colonial harms and intergenerational traumas, the sentencing judge must consider Gladue principles and avoid incarceration where appropriate. Where Indigenous women, girls, and gender-diverse people are vulnerable to violence, justice system participants must also prioritize victim healing and recovery.

Allen, M. “Crime Reported by Police Serving Areas Where the Majority of the Population is Indigenous, 2018.” (November 2020). Statistics Canada. Accessed from https://www150.statcan.gc.ca/n...

Reclaiming Power and Place: The Final Report of the National Inquiry into Missing and Murdered